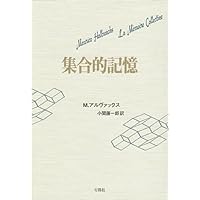 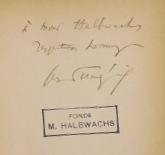 Born in Reims, France, Halbwachs attended the École Normale Supérieure in Paris. There he studied philosophy with Henri Bergson, who had a big influence on his thought. He aggregated in Philosophy in 1901. He taught at various lycées before traveling to Germany in 1904, where he studied at the University of Göttingen and worked on cataloging Leibniz's papers. He was nominated to co-edit an edition of Leibniz's work which never came to fruition.

He returned to France in 1905 and met Émile Durkheim, who sparked his interest in sociology. He soon joined the editorial board of L'Année Sociologique, where he worked with François Simiand editing the Economics and Statistics sections. In 1909 he returned to Germany to study Marxism and economics in Berlin.

He also has a son Pierre Halwachs that influenced Deleuze in the 1940's.

From Deleuze ABCedaire : "Deleuze says that it was there in Deauville, without his parents and his younger brother, where he was completely nil in his studies, until something happened, such that Deleuze ceased being an idiot. Until Deauville, and the year in the lycee there that he spent during the "funny war," he had been null in class, but at Deauville, he met a young teacher, Pierre Halwachs (son of a famous sociologist), with fragile health, only one eye, so deferred from military duty. For Deleuze, this encounter was an awakening, and he became something of a disciple to this young "maître". Halwachs would take him out to the beach in winter, on the dunes, and introduced him, for example, to Gide's _Les Nourritures terrestres_, to Anatole France, Baudelaire, other works by Gide, and Deleuze was completely transformed. But since they spent so much time together, people began to talk, and the lady in whose pension Deleuze and his brother were staying warned Deleuze about Halwachs, then wrote to his parents about it. The brothers were to return to Paris, but then the Germans invaded, and so they took off on their bicycles to meet their parents in Rochefort... and en route, they ran into Halwachs with his father! Later in life, Deleuze met Halwachs, without the same admiration, but at age 14, Deleuze feels he was completely right."

Throughout World War I, Halbwachs worked at the War Ministry. Shortly after the end of the war, he became professor of sociology and pedagogy at the University of Strasbourg. He remained in this position for over a decade, taking leave for a year as a visiting professor at the University of Chicago, when he was called to the Sorbonne in 1935. There he taught sociology and worked closely with Marcel Mauss and served as the editor of Annales de Sociologie, the successor journal to L'Année Sociologique. In 1944 he received one of France's highest honors, a chair at the Collège de France in Social Psychology.

A longtime socialist, Halbwachs was detained by the Gestapo after protesting the arrest of his Jewish father-in-law.[1] He was deported to Buchenwald, where he died of dysentery in 1945.[2]

Part of his books were offered by his widow to the library of the Centre d'études sociologiques and are now held at the Human and Social Sciences Library Paris Descartes-CNRS.

Halbwachs' most important contribution to the field of sociology came in his book La Mémoire collective, 1950 ("The Collective Memory"), in which he advanced the thesis that a society can have a collective memory and that this memory is dependent upon the "cadre" or framework within which a group is situated in a society. Thus, there is not only an individual memory, but also a group memory that exists outside of and lives beyond the individual. Consequently, an individual's understanding of the past is strongly linked to this group consciousness.

Halbwachs also wrote an important book on suicide, Les Causes du suicide, 1930 ("The Causes of Suicide"). In this book he followed the footsteps of his mentor Émile Durkheim, expanding and elaborating upon the former's theories on suicide.